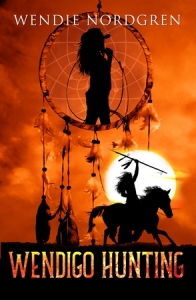 Prejudices can run deep, and grudges can last for decades. Unfortunately for Rozene, such is the case between the Wendigoag, the Four Bears tribe, and the werewolves.

Fearing what she has become and fighting against her own nature, Rozene desperately tries to follow her heart. Rejected by the man she loves, she is determined to put her pain behind her, but her romantic entanglements have become knots. Her heart is torn amongst Hunting Wolf, with his Wendigo magic calling to her blood, Colby, the cowboy turned werewolf, who has claimed her as his mate, and Chief Sam Stillwater, the bear shifter, who her own heart has claimed. Each of them calls to her soul, demanding her loyalty and love, but whose call should she answer when she loves them equally?

However, Rozene’s romantic angst will have to wait. An ancient dark magic is unleashed upon the inhabitants of Silver Springs. Chenoo, evil ice spirits, are freezing to death people and livestock. To survive, the Four Bears tribe, the Wendigoag, and the werewolves will have to overcome their own prejudices and fight together or die together.